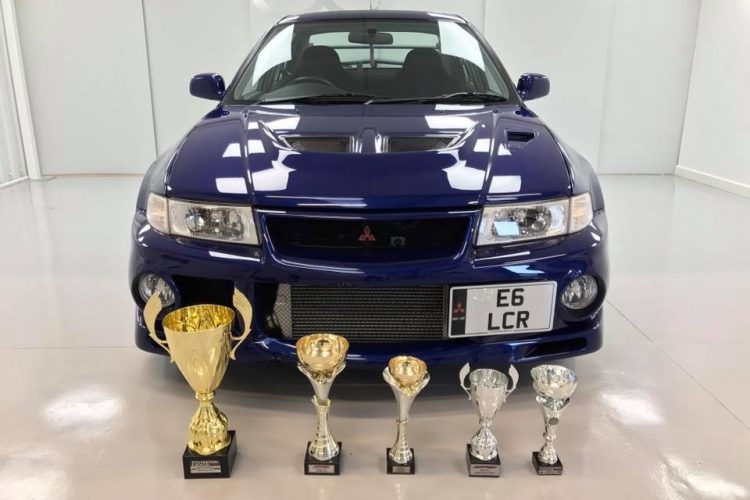 This Evo 6 was purchased from the original owner, and had been used for only a few journeys per year.

Whilst the car had been lavished with expense and maintenance over the years, it had simply been used and then put away each year.
The paintwork, whilst original, was in need of a 2 stage enhancement machine polish, and various clips, bolts, and screws were showing signs of age.

Once back at headquarters after collection, it was decided that this vehicle would be turned into the best example we could make it, and used for a year or two by ourselves.
So on to the ramp, and the cleaning of the underside was underway – this example was imported from Japan when new, and as such had no underseal applied, amazingly the underside was in good order other than needing a clean along with a couple of brackets being re zinc plated in the original finish.

All four wheel arches had the same treatment, with various screws and brackets being re zinc plated, all plastics treated, and of course the brakes / suspension components all being cleaned.
The paintwork had a full 2 stage enhancement by our detailer, who did a superb job in bringing the paintwork back to life, looking better than ever before.

Once this was done, we turned our attention to the engine bay, replacing just a couple of parts, but always using genuine / original parts from Mitsubishi, including things such as a brand new original intercooler from Japan, new bonnet latch….. the list goes on. even the exhaust manifold studs were replaced with genuine items, to ensure that the engine bay looked as fresh as possible throughout.
Any new items that were not in the correct zinc plated finish were sent away to be plated – this attention to detail that was applied across the entirety of the car paid off, with the car winning various trophies from various shows.